If you’re an art student, you’ve probably seen most of your friends naked in each other’s art.

Nudity just isn’t a big deal in artsy communities— as a matter of fact, it’s necessary and standard for learning about the human form. Human skin reflects light differently from clothes, so having someone wear a flesh-toned leotard wouldn’t suffice.

An art model poses, often nude, in front of the class, as students draw them. This seemingly simple job demands much confidence in one’s body, body awareness, and pain tolerance. If you’ve ever wondered how they stay so perfectly still, the short answer is that they don’t! They’re humans who feel pain, have limits, and take breaks for food, just like you.

How do I know? I work as an art model. If you’re curious about what it’s like, read on and find out:

1 It doesn’t matter if you’re not conventionally attractive

“Oh gosh, I would be so self-conscious if I did that as a job,” I often hear in response. The truth is, that was never a concern for me. Even though I’m super self-conscious before a nude photo shoot, posing in front of a class is a totally different job.

I’m there to help the students learn. It doesn’t matter if you’re not curvy, or not muscular, or don’t have chiseled cheekbones. It helps students to practice drawing all sorts of different body types and faces, in different positions and lighting, and yes, at different times of day as I eat more and my stomach expands. To them, it’s just another, real human body.

Let’s also frame it through the lens of representation: I’m giving the students the ability and option to draw people with my body type and bone structure in their future works of art.

ETHNIC DIVERSITY IN AMERICAN ART: A GROWING NORM
It’s rad to know that not only can the students draw Asian eyes accurately, but also that a student chose to draw me, an Asian-American woman, as part of a tarot deck. No stereotypical faux-ethnic garb or Dragon Lady bullshit— just a person who happens to be Asian.

In a perfect world, that wouldn’t be noteworthy; there are artists making new multicultural tarot decks all the time. However, as things currently are, tarot can be quite white. Working as an art model of color means increased representation for people of my ethnicity.

FOR MY JOB, IT CAN ACTUALLY AN ASSET THAT MY BEAUTY ISN’T TOTALLY CONVENTIONAL
No matter what you look like, it’s good for art students to be able to draw a variety of people. To others, posing nude might be nerve-wracking. To me, it’s at worst just me showing what a real body looks like, and at best doing my part to diversify beauty in art.

…but it is more consistent, low-maintenance, and enough to make a living. Art modeling for classes generally pays $15-20 an hour. In contrast, for a photo shoot, I can expect to make $30-65 per hour of shooting. The key phrase is, “per hour of shooting”.

IF YOU’RE A FREELANCE ALT MODEL, THERE’S PROBABLY MUCH MORE TO YOUR JOB:

THESE DRAWBACKS DON’T APPLY TO ART MODELING TO THE SAME EXTENT
Once you get the ball rolling, it’s generally pretty steady. You do have to network with art instructors if there isn’t a coordinator assigning models to classes, but it’s not hard to find universities and community colleges with art programs in an urban area.

It’s much more stable to be able to work 40 hours a week on a lower per-hour wage, than to be on-and-off with a higher per-hour wage for fewer hours at a time. This isn’t to say that being an art model is better; it comes down to whatever’s more rewarding for you. What’s more, you can certainly do different kinds of modeling to generate multiple income streams under the same brand.

3 How to quickly think of short gesture poses

The first thing students do in a drawing or painting class is pretty much always gesture (warm-up) drawings. The model holds a series of these poses for about 1 minute each (though it can be anything between 15 seconds and 3 minutes).

For the most part, people know whether they can hold a pose for 1 minute.

The challenge with short poses, however, is coming up with many poses in quick succession. Pretty much my whole time holding a short pose, I’m thinking about the factors going into what pose I’m going to do next. Here are some quick guidelines.

JUST GET MOVING!
If you don’t have a background in dance, fitness, or sports, sign up for a class or look up videos. Take mental notes! It’s probably the most important thing you could do to think of poses on the fly. I visualize myself go-go dancing or doing yoga, and show what it would look like if I froze at a random moment.

DO I WANT TO DO A LYING, SEATED, KNEELING, OR STANDING POSE?
Come up with a go-to pose or two for each of these 4 categories: lying, seated, kneeling, standing. Then, branch out with variations for each pose from the front view, back view, side view, and 3/4 view. With this tip alone, you have more than 16 combinations you could do!

WHAT ARE MY ARMS AND LEGS DOING?
To keep things interesting, have asymmetries among your arms and legs. For example, one leg is bent to the side and the other is straight. One arm is up above your head and the other is draped across your chest. Variations of contraposto with one hand on your hip are easy classics.

Foreshortening is also something to keep in mind: extending an arm or leg looks totally different from the front view vs. from the side view, so I always make sure to include a few poses where I have an arm or a foot extending towards the viewer.

WHAT FURNITURE OR PROPS DO I HAVE NEARBY THAT I CAN USE?
Props easily add variety to poses and/or offer support! Here are a few items very common in figure drawing classes, and some ideas on how to use them for flair.

GESTURES TAKE MORE CREATIVE THINKING, BUT THEY GIVE YOU MORE CREATIVE LICENSE!
Gestures and short poses were the part I worried most about when I started, but once I got moving, it actually ended up being a lot of fun. My mild fear of doing the same pose twice was largely unfounded, considering I probably couldn’t do the same pose from the same angle twice if I wanted to.

Once you get past the set of short gesture poses, the time increases to 20 minutes at a time.

4 Long poses are excruciating in ways you don’t expect

If you ask a figure model, “what’s the hardest pose you’ve ever had to do?” chances are, their answer won’t be what you expect. It’s not even poses that demand the most strength or flexibility, or are the most complicated, that hurt the most. The most painful part of being a figure model comes down to circulation issues when you hold seemingly basic poses for a long time. A hand and foot might go numb, or a locked knee might be painful to flex.

LONG POSE NO-NO: PRESSING HANDS AND FEET AGAINST HARD OBJECTS
There have been times where I seriously couldn’t feel my foot; I could move it, but totally not FEEL the movement at all. This is much more likely to happen if I rest weight on a bony part of my foot against a hard surface, so having cushy towels or a pillow helps a lot.

Likewise, I don’t want to sit on the edge of a hard chair, which places a lot of pressure on my thighs and, yes, reduces circulation. I’ve even had a hand get tingly and fall asleep from bending my wrist and pressing my hand too hard on my hip, something I totally didn’t realize was a thing.

We don’t generally stand with legs totally straight. I learned the hard way that there’s a good reason for that: it’s fucking painful to maintain a knee locked straight, especially while shifting weight on it, for 20 minutes. When I get a break and start moving my leg again, it feels like Jell-O.

And aside from the pain, there are practical reasons you wouldn’t want to do that. For one, it’s bad for your knee-joint, and second, it’s a great recipe for low blood pressure in the brain. Normally when you’re standing, your knees are slightly bent and you engage legs muscles to hold you steady. Keeping your knee totally straight and rigid, by contrast, demands far less muscle engagement.

Therein lies the possibility of fainting: if your leg muscles aren’t engaged when you stand, your veins do less work to bring blood back up to the heart, and less blood goes to your brain. This brings me to my next point…

Bring snacks and water, be assertive, and take care of your physical and mental endurance. You don’t want your blood sugar to drop while you’re posing, which can also lead to fainting, and you definitely don’t want to abruptly end a pose in pain. It’s critical to have body awareness and take breaks accordingly.

If you need to shake a leg out a few times while holding a pose, it’s okay to do that and return to the pose. If one foot is especially giving you trouble, it’s okay to give the students a heads-up and rest your foot while maintaining the rest of the pose. You can always bring it back to its previous place.

Nobody is going to be mad at you for taking a few seconds to recover. Even if you need a 5-minute break before one is scheduled, speaking up and taking breaks still allows you to do your best. Frankly, if someone has never figure modeled before, and never known how hard it can be, they don’t have much room to criticize you.

My back, shoulders, and neck would often be sore after I came home from work, but that’s okay when I have no shortage of back massagers. Treat yo’self! Help yourself so you can help others. 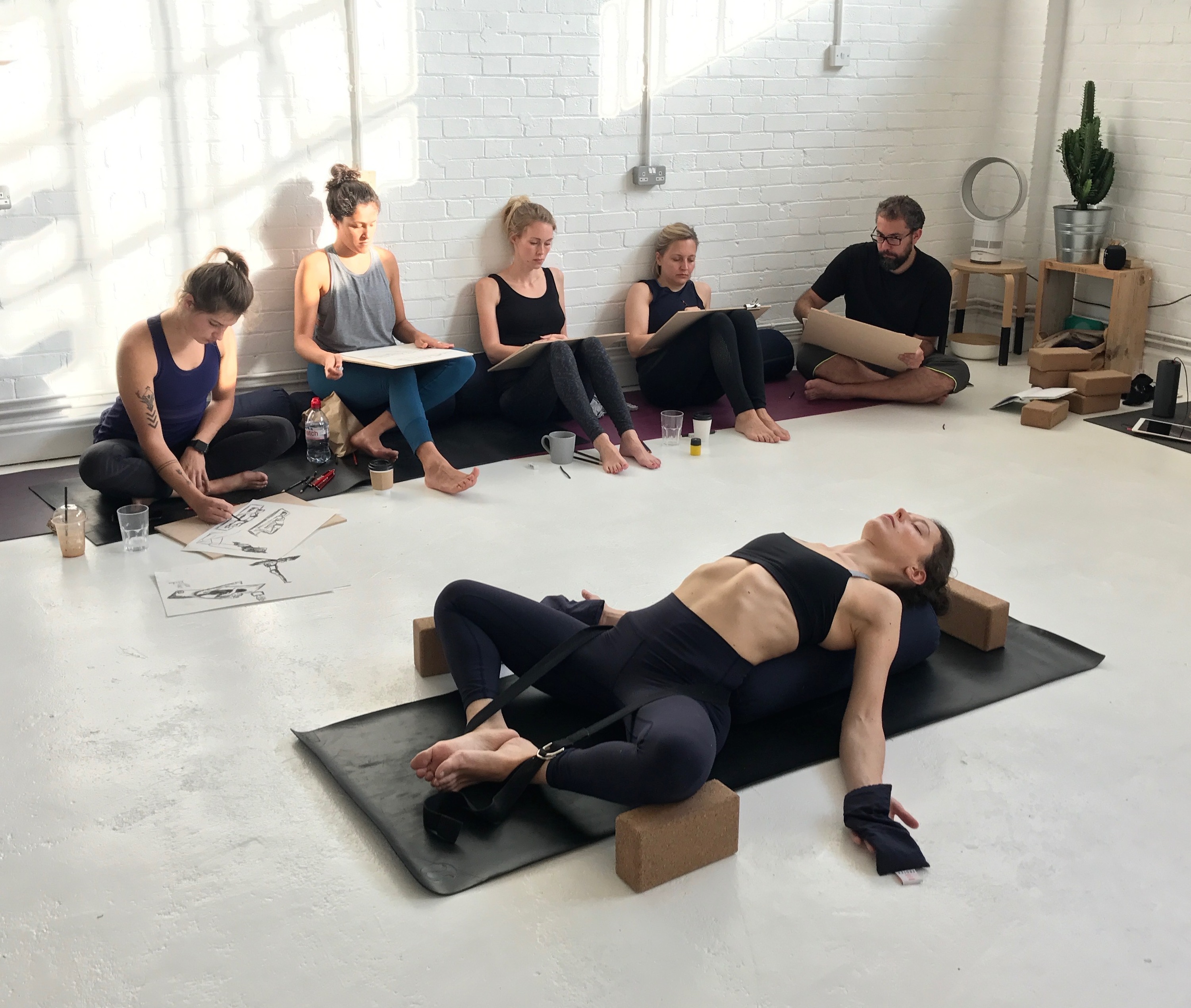 6 Encourage the students who draw you to be assertive too!

Remember, figure modeling is all about helping students learn. If I start a pose for 20 minutes, take a break, and return to the same pose for another 20, I always ask the following question:

“Is there anything you’d like me to adjust before we start again?”

That way, I can make sure for their sake matches the pose I had before. This makes them more comfortable with requesting that I rotate my leg a little, adjust the slope of my shoulders, whatever I need to do to keep it consistent.

Even when I start a new long pose, I ask what adjustments I could make. The thing is, in a foundation-level class, students might be used to settling and not asking for what they want. I want them to know that it’s totally okay to make requests. As a former art student myself, I want them to be satisfied with what they draw.

It’s a simple job, but a potentially rewarding one if you’re into art and want to get involved in its creation. If you’re already near a big city, you can start by:

Once you get moving and understand how your body reacts to different poses, figure modeling is a lot less scary and a lot more fun!