If you haven’t encountered boob art before, you’re probably out of touch with the latest trends. This titillating phenomenon has gone viral through blogs and influencers who make rugs, paintings, and merchandise that depicts the female form. If you look around, you’ll see that boob art is literally everywhere! However, you may not know the true meaning behind it.

The Popularity of Boob Art

Firstly, the portrayal of ample bosoms is nothing new in the world of art. Images of female breasts have been popping everywhere throughout history, even in prehistoric times (roughly 28,000 BCE). Let’s not forget Ancient Egyptian or Roman art, 9th Century China, the Middle Ages, Japan’s Edo Period, the Renaissance, Baroque, and so on.

However, when it comes to the boob art trend, it’s a largely modern phenomenon. If you check out the search term on Etsy, you’ll find thousands of results for remarkable boob prints, line drawings, line art nudes, and even home accessories with boob motifs. Moreover, major brands like Urban Outfitters, along with independent boutiques, all sell some kind of boob-themed product. Of course, they differ in color and proportions, but the goal isn’t to portray massive Playboy bunny boobies. Rather, contemporary boob art is a type of minimalistic art. The goal of it is to appeal to all genders without a strictly erotic purpose.

The earliest portrayal of uncovered boobies in art goes back to approximately-28,000-BCE Austria. The Venus of Willendorft is a figurine of a naked woman with prominent breasts. According to historians, it symbolizes fertility, reproduction, and life, and it is one of many similar figurines.

However, throughout the ages, artists have used breasts to send various other messages. Obviously, they represent sexuality and the female form. For example, exposed breasts in Ancient Egypt are almost always seen on deities. They represent motherhood and nurturing. The same goes for works from the Rennaisance, which took inspiration from Ancient Egypt and Classical Art.

Yet, in Italian art, portrayals of breasts have also symbolized martyrdom and torture. The religious portrayals of St. Agatha have emphasized sado-sexual and sacred elements through visualizations of breast abuse. Italian paintings also depict Cleopatra committing suicide via a snake bite to her bosom. Most historians will compare it to the imagery of the Virgin Mary nursing baby Christ to emphasize just how much the symbolism can differ in breast iconography.

Furthermore, from the 16th to the 19th century, many western artists like Rubens or Rossetti, as well as those from India or Japan, have experimented with the “ideal” portrayal of breasts while still using them as a symbol of fertility, nursing, and sexuality.

As you can see, breast symbolism varies depending on the place and time. There are simply too many eras to mention here. Also, art has portrayed nude male imagery much more often than the female form. But, by the 21st century, the portrayal of breasts has changed a lot due to new movements and women’s campaigns.

Boobs as a Symbol of Various Campaigns

The reason why modern boob art is so popular is that it symbolizes activism, Feminism, body positivity, and several important campaigns. As mentioned, this kind of breast art is usually quite simple. It often consists of line drawings, breast prints, wall art, etc. Breasts can also be included on home decor, like boob key hooks and flower pots or mugs with black and white boob graphics. And again, while the goal is not to portray sexy boobs and their arousing properties, this type of art is audaciously sexual.

When it comes to Feminism, boob art symbolizes pride. It also stands for self-empowerment without objectification and exploitation. In fact, infinity boob t-shirts were one of the most prominent symbols of the Free the Nipple women’s campaign.

You will also see lots of boob art during Breast Cancer Awareness month each October. One example is BOOBS, a project from Happy Luja. It’s a book featuring nearly 100 artists who specialize in portraying the female breasts. The works are a bit more complex compared to what you’d see on Etsy’s boob art products, though.

However, the symbolism is relatively the same. It encourages Feminism, the female form, health, and of course, breast cancer awareness. Another example comes from FEMEN and its activists who create art prints of their own breasts and sell them for charity purposes. 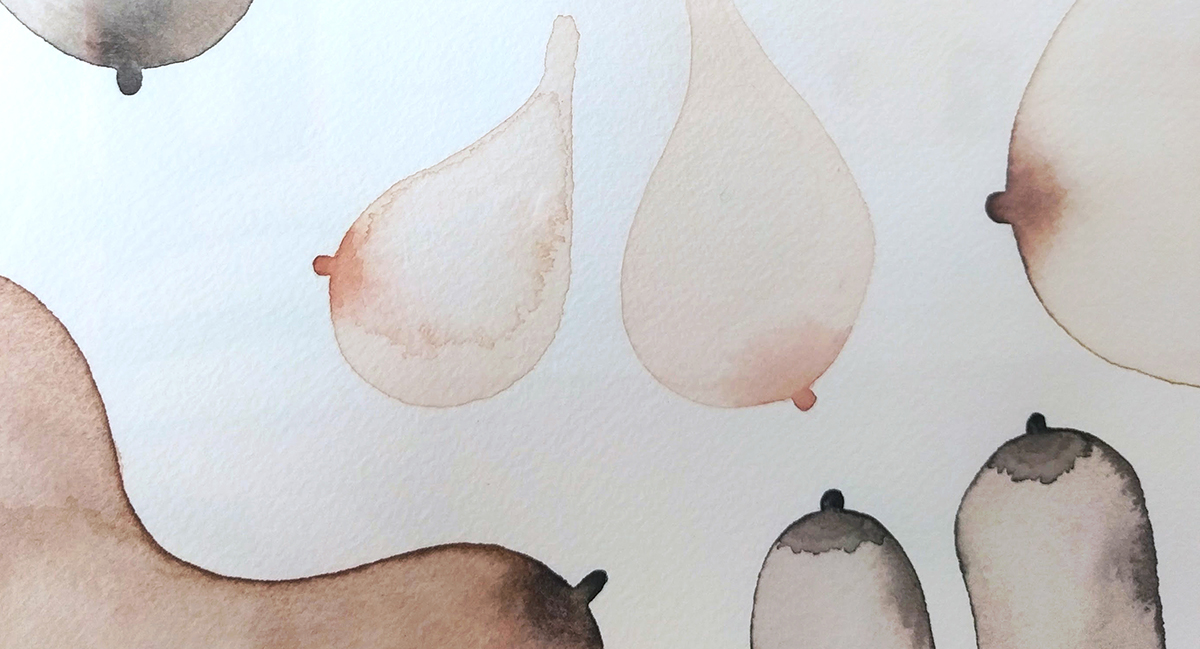 If you decorate your house with boob art or wear it in public, you will make a bold statement. It can put the spotlight on female breasts and emphasize that they are not something that’s supposed to be objectified and kept in private. This type of art makes a unique statement regarding femininity, sexuality, freedom, and equality. It’s also a helpful way to support breast cancer awareness and other causes!